No Result
View All Result

Behind the mask: meet the artist pushing cultural boundaries

The Khon (โขน) dance performance is dated back to the Ayutthaya Era.  It’s considered “high art” and back then only members of the royal family may perform in it. The dance has no dialogue and features beautiful body movement accompanied by music. The leading performers would wear intricate head masks.

The most famous Khon performance is based on the mythical tale Ramakien (Glory of Rama), a masterpiece of Thai literature.

Today, commoners may become a Khon performer, but the person must be trained by reputed traditional dance institutes and must adhere strictly to conventional protocols. All facets of Khon revolve around two key concepts “high art/culture” and “traditional.” Therefore, it is “controversial” if one tries to change it or even tweak it just a bit.

Saran Yen Panya, 35, is an artist. He designed a Khon head with a feature mimicking the Hindu Goddess Kali, the tongue sticking out. It’s contemporary pop, which many people may deem “disrespectful.” 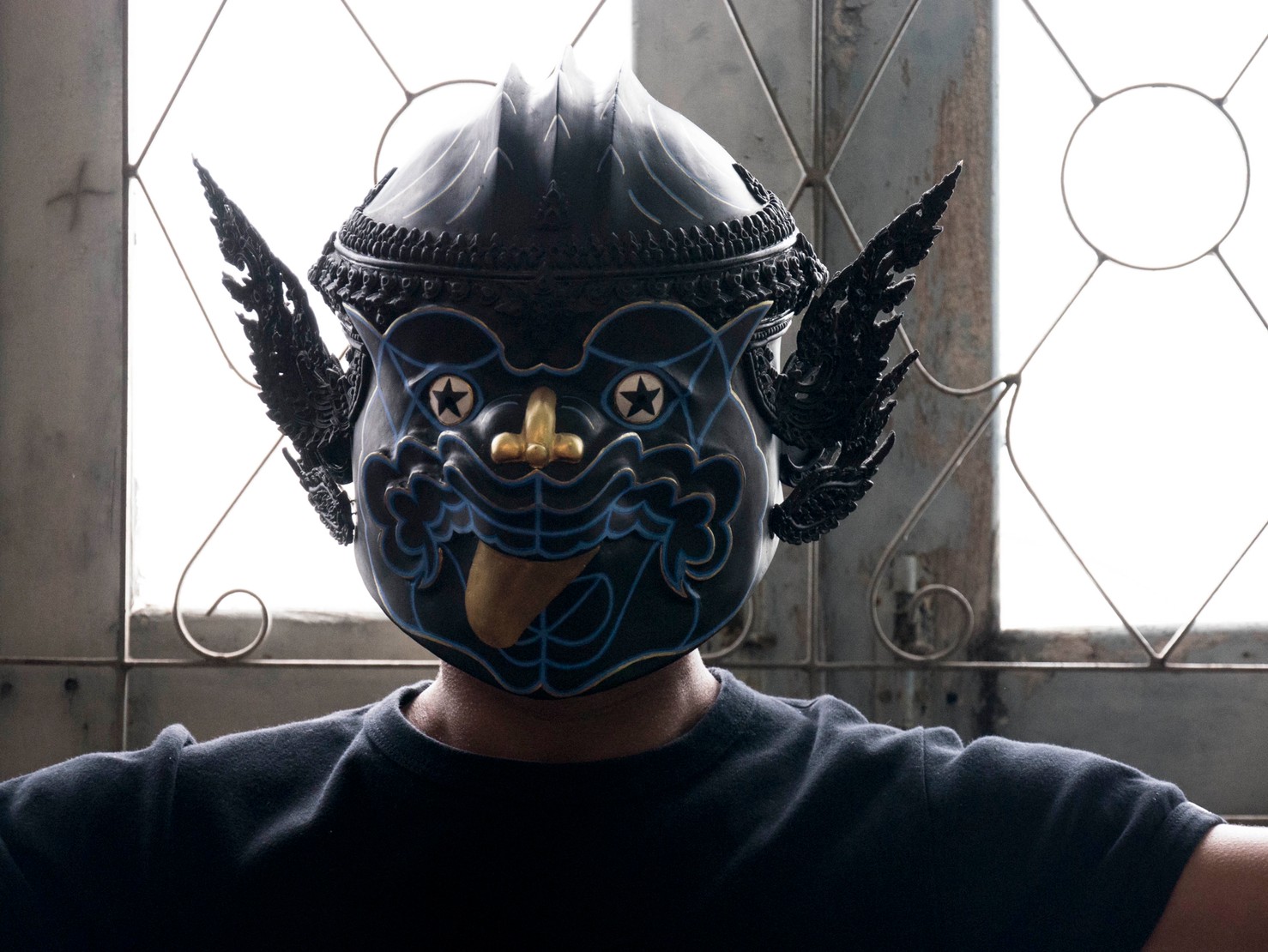 His “controversial” Khon head will be up for bidding on 12 July as part of the ‘Mask for the Masses’ project that invites Thai artists to create limited edition “fun and funky” masks for bidding. The money will go towards various charities.

For more information on how to place your bid, go to their Facebook.

“Conserve versus Conservatism,” please explain what that means.

To conserve something, you must first demolish it. When I wanted to make this Khon head, I drew the draft and sent it to a few places to get it made. Everyone rejected me, except for one guy who refuses to be named. Everyone else said that it was a taboo and told me that I should not do it.

So I decided that I want to disrupt and conserve conservatism by demolishing it first.

What would happen if Khon becomes “pop culture”?

It wouldn’t. The thing is it just wouldn’t. People will speak very negatively about you, and that would discourage people from picking it up and be creative with it.

There is a mindset that believes high art should be preserved and cannot be touched, and of course, it’s not wrong to think that. But I think that one-day high art will turn into dust and forgotten.

This kind of mindset that anything “cultural” should not be touched doesn’t just prevail in the art industry, but literally in every aspect of society.

Is there much room for artists to be creative with their art?

There’s a lot of room to get creative, but do artists dare to go there? It’s dangerous. They’ll cast stones at you. But just because I rework traditional high art doesn’t mean I’m disrespectful. I just appreciate it in my way.

I still love the way Thai culture is.

How would the artist community benefit from this project?

This project is not for artists but for everyone who came together to help the crumbling economy in this country, no matter what social class you belong to.

The 1% of the country can come and bid these art pieces. The money goes to charities. You just have not to be ignorant and look outside of your bubble.

In what direction would you like to see the art industry in Thailand?

I want to see the change where people no longer put a label on things, whether it’s “low” art or “high” art. Art exists on the side of the road. I want art to be inclusive and not just reserved for rich people.

I’m also very interested in politics, and my work is very political, and politics is in everything.

Loma Lookmoonbee: The first Thai to fight in the UFC

Stigma and Harassment: the life of a female bartender

I don’t hate my country. I am simply curious.

The news you can trust (if you trust the army)

A kingdom of hatred and violence

The senator who wants to save the children

Only the mediocre are proud of mediocrity

Can’t get the paperwork done in one month? Seriously?

No Result
View All Result